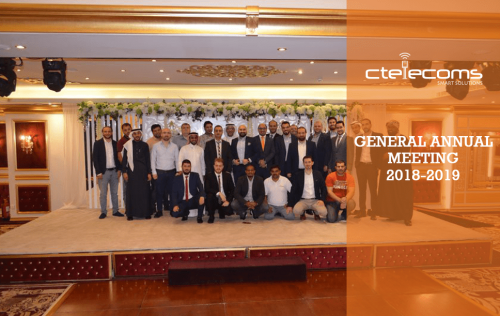 Afterwards, Mr. Hani Shaban lead a keynote session in which he reviewed the most prominent accomplishments achieved during 2018, and every department manager had the chance to present his/her achievements in figures. E.g, events count, new leads, campaigns, profits, new projects, new partnerships as well as the goals set for 2018. Ctelecoms’ objectives for the new year 2019 were also covered by Mr. Shaban. They included:
1- Helping the client understand the latest technologies.
2- Ensuring customer satisfaction.
3- Maintaining high-quality projects.
4- Evaluation & support.

The Annual Meeting was sealed with a concluding speech by our General Manager along with a distribution of recognition Shields for Ctelecoms most prominent employees who’ve been around for 5 years or more. Other employees also received thank-you certificates as well as medals for the efforts they’ve been exerting.

Afterwards, we all played a company-wide game, called Sekons, in which Ghada and Bahaa topped the rest of the players. Second top players were Rami & Fahmi. Third tops were Abdulrahman, Abdula’al, and Abdulrahman Al-Dali.

Of course, we never missed our prayers during the annual meeting. It was all fun; we had a great time gathering together like this, hopefully the new year 2019 will bring even further prosperity and accomplishments to Ctelecoms.